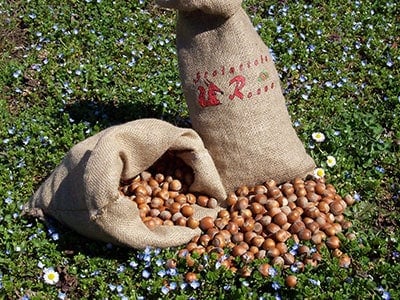 The Piedmont hazelnuts are produced on our sunny territory, where the climate meets perfectly the fruit cultivation needs.

The hazel, a soft wood betulacea, is a plant whose life cycle lasts all year round. Once it loses its leaves it does not cease to vegetate like most of the not evergreen flora: in winter the male flower, which looks like a little worm (“gatin” in the Piedmont’s dialect), produces pollen. The first buds begin to appear with the arrival of warmer temperatures in March, followed by flowers and fruits and the resumption of the production cycle of the plant.

Then we resume cultivation: we turn the soil over in order to oxygenate it and remove the harmful weed. Then we complete the pruning and tying started in Autumn and we repair possible damages caused by snow excessive load on branches.

In the meantime, the fruits grow and mature until August, when they are harvested.

The Cuneo province in Piedmont holds the record of the cultivation of hazels as primary culture: with around 7,000 hectares it covers almost 89.5% of the regional land destined to hazels cultivation and provides almost 85% of the Piedmont production.

According to the disciplinary the IGP Piedmont hazelnut can be produced throughout the province of Cuneo except for some mountainous areas and some municipalities in the lowlands. The territory of election is the Langa area, especially the Alta Langa where the main crops are.

The IGP Piedmont hazelnut can be grown also in other provinces of the region, namely the Provinces of Alessandria, Asti and Turin for large part of their territory and in some municipalities in the provinces of Biella, Novara and Vercelli.

The hazelnut , besides a significant content of essential amino acids and vitamin E, is particularly rich in lipids, with a caloric intake of 700 kcal per 100g of dried hazelnuts. In particular, the lipid fraction consists of more than 40% of monounsaturated fatty acids (such as the oleic acid) and has the highest ratio of monounsaturated / polyunsaturated than other dried fruits. Recent studies seem to demonstrate the positive effects of regular consumption of hazelnuts on human health. In fact, it is confirmed that a diet rich in oleic acid (the same fatty acid found in the extra virgin olive oil) allows to maintain low levels of the so-called “bad cholesterol ” in the blood, and to raise the levels of the “good cholesterol”, which – thanks to its protective effect on cell membranes – represents an important defence from vascular pathologies. Furthermore, due to its high content in tocopherols, including vitamin E, the hazelnut provides a considerable contribution of antioxidant agents, which slow down the aging of tissues.